Crimes and Criminals and the Writers Who Love Them

Sisters in Crime is an organization founded on the principles of equality and inclusion. We believe Black lives matter.

The murders of Breonna Taylor, Ahmaud Arbery, and George Floyd are only three recent reminders of the 400-year history of violence visited upon the Black people of the United States. Militarized police and white supremacists using peaceful protests to incite further violence emphasizes once again that Black lives are vulnerable. Wanting equality is not enough. Wanting peace is not good enough. We have work to do, and it is work that belongs to us all as much as those directly affected by the violence.

We at the national board of Sisters in Crime strive to learn and are committed to putting in place what it takes to create a more welcome, more supportive and more safe space within our organization and the entire crime writing community—in the hopes that we inspire our members and others to join us in sustaining a just community for all.

With this in mind, we are considering several new initiatives to better support the fight against racism and hate within our organization and its chapters.

If you are moved to make an individual effort now, consider making a donation to Black Lives Matter, the American Civil Liberties Union, the National Police Accountability Project or other similar organizations fighting racism, rights violations, and/or police brutality. To educate yourself further on issues related to these issues, you may consider books such as How to Be an AntiRacist by Ibraham X. Kendi, White Fragility by Robin DiAngelo, or So You Want to Talk About Race by Ijeoma Oluo. Buying books? Also consider supporting the work of crime writers of color. You can find a list of authors at Sister in Crime’s Frankie’s List and also at the website for Crime Writers of Color. You could also support Black-owned bookstores at the same time. There are additionally many films, podcasts, and other resources for those who want to learn more.

Sisters in Crime will also be looking to leverage a few of our ongoing initiatives to give additional support where it is needed most:

• The Sisters in Crime Eleanor Taylor Bland Award will expand to give more support to more writers of color each year, and to build a cohort of writers of color who can learn from and support each other. We will be expanding the support offered to winners, runners-up, and all participants. We are extending the deadline for applications by two weeks to June 22, 2020; entry is always free.

• Our We Love Bookstores grant program will make additional $500 grants in 2020 to Black-owned bookstores.

• Our We Love Libraries grant program will earmark the remaining $1000 grants in 2020 to libraries in underserved communities.

If current members of Sisters in Crime have suggestions or questions about any of these measures or other actions, please feel free to email national president Lori Rader-Day at president@sistersincrime.org.

The Sisters in Crime National Board
Posted by Tina Whittle at 7:49 AM No comments:

Please join us on Saturday, June 22th from 11:00 to 1:00 at the Hilton Head Branch of the Beaufort County Library for our June meeting, The Suspense Writer's Guide to Structure.

This is a workshop specifically geared for writers of crime fiction using screenwriter Dan Harmon's Circle method. Based on Joseph Campbell's Hero's Journey, this method isn't linear, but is instead cyclical, and unites plot and character in an easy-to-use framework that is useful not only for planning, but for checking the structural integrity of a finished work. It's also an excellent framework for laying clues and red herrings.

Non-members are welcome (and encouraged!); writers of any type of fiction (not just mysteries) will find this information helpful.
For more information, please visit our Facebook event page.

Our May Meeting: MURDER! 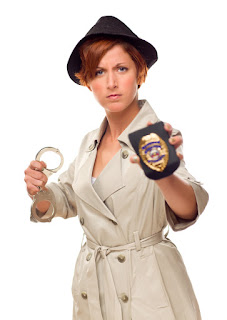 Please join us for our May meeting, Saturday, May 11th from 11:00 AM -- 2:00 PM at The Chromatic Dragon Gaming Pub in downtown Savannah.

We're celebrating all things mysterious and crime solve-y with a get-together at The Chromatic Dragon in downtown Savannah, the Lowcountry's best gaming pub. We'll be bringing POST-MORTEM LOS ANGELES: LIGHTS, CAMERA, MURDER!, the Mysterious Package Company's noir mystery-in-a-box—you bring your sleuthing skills as we solve the case of the slaughtered starlet. This is a group activity-—we provide the game, you buy whatever food and drink you'd like (The Chromatic Dragon is a full service restaurant and bar, so you'll certainly find something you'll like).

For more info about the game we'll be playing, visit:
https://mysteriouspackage.com/products/post-mortem-la-lights-camera-murder?

And for more info about the Chromatic Dragon (including menu and location), visit: https://chromaticdragon.com/

Hope to see you there!
Tina
Posted by Tina at 1:22 PM No comments: 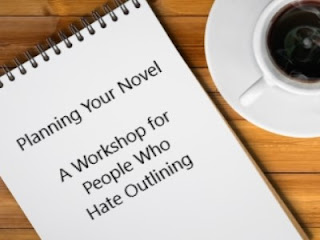 Please join us on Saturday, April 13th from 11:00 to 1:00 at the Hilton Head Branch of the Beaufort Library for our April meeting, a workshop on planning your novel (no outlining required!).

Donna Kortes will share several different organizing/structuring/planning methods for getting your novel in order. Non-members are welcome (and encouraged!); writers of any type of fiction (not just mysteries) will find this information helpful.
Afterwards, we're going out to lunch for those interested in continuing the conversation and the camaraderie.

Posted by Tina Whittle at 1:20 PM No comments:

We'll be meeting in the community room of member Lance Adams' complex. The address is 121 Tillman Rd. Statesboro, GA 30458. (check your email for the gate code -- message Tina Whittle if you didn't receive it).

Once inside the gates the road splits into three. Take the left branch and follow it to the back of the complex. The Clubhouse is on the right. There is parking in front. Come upstairs and turn left.

Our topic will be Branding for Mystery Authors. We'll be discussing what exactly branding is, why it's important, and how you can go about doing it (even if you haven't finished, or even started, your book).

Lance is hosting us for lunch (Mexican food for both carnivores and cheese-eating vegetarians) so feel free to bring beverages and/or desserts as you would like (though you are required to bring nothing).

BONUS: SinC National is offering a FREE one-hour video webinar on this topic the Tuesday after our meeting . You can get some of the legwork for the webinar done ahead of time at our meeting, or use it to further deepen your knowledge. Here's the link to register: https://www.sistersincrime.org/events/EventDetails.aspx?id=1184722

Please join us for an afternoon of good reads and camaraderie at Two Tides Brewing Company, a local craft brewery in Savannah's Starland District. If you wish to participate in our book exchange, please bring 3 "gently read" mystery novels (wrapped to be surprises!) for under our "tree."

Guests are welcome--Low Country Sisters in Crime members will get their first drink for free (sodas and other non-alcoholic drinks available). The brewery has a few basic snacks for sale (chips and pretzels and the like) but we are free to bring our own munchies.

For more information, you can visit our Facebook page. Please RSVP so that I can give Two Tides an accurate head count.

PS: The Starland District is an excellent and eclectic shopping destination, with lots of unique shops. You can read more about it here: https://starlanddistrict.com/

Posted by Tina Whittle at 11:50 AM No comments: 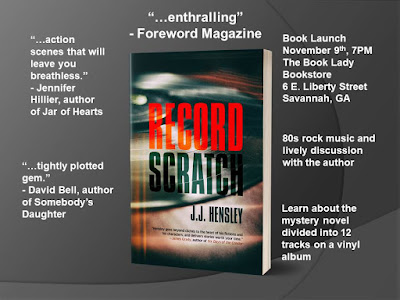 Record Scratch is a mystery novel divided into 12 tracks on a vinyl album, which brings back his former Pittsburgh narcotics detective, Trevor Galloway, to face a case he doesn’t want. It’s certainly a case he doesn’t need. The client—the sister of a murdered musician—seems a bit off. She expects Galloway to not only solve her brother’s homicide, but recover a vinyl record she believes could ruin his reputation.

Hensley, the author of Measure Twice, Resolve, Bolt Action Remedy, and short story contributor to The Night of the Flood, is a former police officer and former Special Agent with the U.S. Secret Service who draws upon his experiences in law enforcement to write stories full of suspense and insight. Mr. Hensley’s novel Resolve was named one of the BEST BOOKS OF 2013 by Suspense Magazine and was named a finalist for Best First Novel by the International Thriller Writers organization.

We will be scratching out some awesome 80s tunes and also welcoming mystery author Tina Whittle, who will put Hensley in the interrogation room and shine a klieg light on his creative process.

Our “ bad cop” moderator Tina Whittle, is the author of the Tai Randolph/Trey Seaver mysteries. Published by Poisoned Pen Press, this Atlanta-based series debuted with The Dangerous Edge of Things and has garnered starred reviews in Kirkus, Publisher’s Weekly, Booklist, and Library Journal. Whittle's sixth book, Necessary Ends, was released in April 2018, and she is an active member of the Low Country Sisters in Crime organization, a regional chapter of the international organization Sisters in Crime whose mission is to promote the advancement, recognition, and professional development of women crime writers

The Bar Will Be Open as we discuss writing, publishing and the art & agony of mystery/thriller fiction.
Posted by Tina at 2:51 PM No comments:

Promote Your Page Too

We are a regional chapter of Sisters in Crime, a national organization whose mission is to promote the advancement, recognition, and professional development of women crime writers. Our vision statement: Serve as the voice for excellence & diversity in crime writing.

Sisters in Crime was founded by Sara Paretsky and a group of women at the 1986 Bouchercon in Baltimore. It currently has over 3600 members in over 50 chapters world-wide, offering networking, advice and support to mystery authors. We are authors, readers, publishers, agents, booksellers and librarians bound by our affection for the mystery genre and our support of women (and men) who write crime fiction and non-fiction.